As in each year at around this date, as do many people, I close one year and open the new one. Among other things, it consists in gathering all postcards I have received during the past year in order to make room for the new ones that will be sent during the New Year.

Right at that moment I take a look at the pictures and stamps, and re-read the messages written by my friends. Last year lots of postcards were sent from Peru where a dear friend was working at University in Lima. Postcards allowed me to learn about historical buildings, cities and legend of the country?s past. From the other side of the pond too, a soul-mate sent me a beautiful postcard from San Francisco.

Postcards have not been lacking from traditional destinations as Paris, Venice, Roma or Berlin. My dearest son sent me one from Helsinki; it is the first one I have received from Finland. Different cities in France, Italy and in the coast of Portugal have been the destination chosen by some friends. The last one came from Demark.

I have one postcard from Moscow, and another from Brest (Belarus). Asia is represented by that from Thailand and Cambodia; only one is from Morocco and a great part of them came from different Spanish cities: Granada, Bilbao, Santiago de Compostela, La Toja, Vejer de la Frontera…

Beaches, historical buildings, churches or temples, rivers, markets… appear in the pictures, and all of them are full of affection for the friend who remember me and, sometimes overcoming the difficulties of find stamps, sent them. Yes, in these times of instant messages, selfish, and so on, ??it can be an oddity to write, send and receive postcards. However, it is such a beautiful moment that when you open your mailbox, through away advertisement and pamphlets, and read the short messages written by your friends and see these wonderful pictures, that it allows you to dream for a second that you are there. 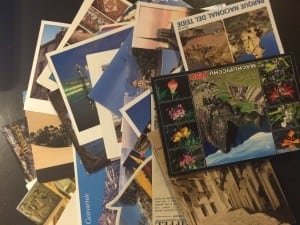 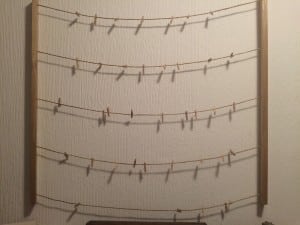 Someone told me that he often sends a postcard to himself from the cities he visits in order to keep a souvenir. I don?t do that, besides that, I have received some postcards from Tenerife where I enjoyed summer holidays.

44 postcards, nice collection during 2015. It is not a collection as an investment, it is only to enjoy. Do you like collecting something? What kind of things? Please leave a comment sharing your experience; I am very grateful to it.